From Complaint Wiki
Jump to navigation Jump to search 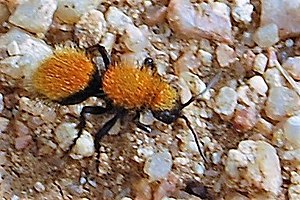 The Mutillidae are a family of more 7,000 species of wasps whose wingless females resemble large, hairy ants. Their common name velvet ant refers to their dense pile of hair, which most often is bright scarlet or orange, but may also be black, white, silver or gold. Their bright colors serve as aposematic signals. They are known for their extremely painful stings, (the sting of the species Dasymutilla klugii rated a 3 on the Schmidt pain index and lasts up to 30 minutes),[1] hence the common name cow killer or cow ant. However, mutillids are not aggressive and sting only in defense. In addition, the actual toxicity of their venom is much lower than that of honey bees or harvester ants.[2] Unlike true ants, they are solitary, and lack complex social systems.[3]

Mutillidae can be found worldwide with approximately 230 genera of subgenera and around 8,000 species worldwide. Over 400 species occur in the North American southwest.[4]

The exoskeleton of all velvet ants is unusually tough (to the point that some entomologists have reported difficulty piercing them with steel pins when attempting to mount them for display in cabinets). This characteristic allows them to successfully invade the nests of their prey and also helps them retain moisture. Mutillids exhibit extreme sexual dimorphism. Like some related families in the Vespoidea, males have wings, but females are wingless. The males and females are so distinct in their morphology that entomologists often find it very hard to determine whether a given male and female belong to the same species, unless they are captured while mating.[5] In some species, the male carries the smaller female aloft white mating, which is also seen in the related family Thynnidae. 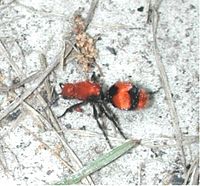 As is the case for all Aculeates, only female mutillids are capable of inflicting a sting. The stinger is a modified female organ called an ovipositor, which is unusually long and maneuverable in mutillids. In both sexes, a structure called a stridulitrum on the metasoma is used to produce a squeaking or chirping sound when alarmed. Both sexes of mutillids also bear hair-lined grooves on the side of the metasoma called felt lines. Only two other vespoid families, (Bradynobaenidae and Chyphotidae) have felt lines, but the females of these families have a distinct pronotum, with a transverse suture separating it from the mesonotum; in female mutillids, these two thoracic segments are completely fused. Members of the family Myrmosidae, formerly classified as a subfamily of mutillids, also have a distinct pronotum in females, but lack felt lines in both sexes.

Adult mutillids feed on nectar. Although some species are strictly nocturnal, females are often active during the day. Females of Tricholabiodes thisbe are sometimes active up to two hours before sunset. Guido Nonveiller (1963) hypothesized the Mutillidae are generally stenothermic and thermophilic; they may not avoid light, but rather are active during temperatures that usually occur only after sunset.

Predation is one of the strongest forces natural selection uses to drive the evolution of an organism's morphology, and behaviour.[6][7][8] During this coevolution, the prey either being consumed by the predator escaping has resulted in a plethora of impressive defensive strategies in prey species to improve the likelihood of escape. Velvet ants avoid predation using the following defense mechanisms; a venomous sting (if female), aposematic coloration, a stridulatory organ in their abdomen, an alarm secretion from their mandibular gland, and a durable exoskeleton.

The venom that velvet ants inject through their stinger has an unknown composition. According to one researcher, the painfulness of the sting of Dasymutilla klugii outscored 58 other species of stinging insects tested; the only species this researcher rated as having a more painful sting were the Paraponera clavata (bullet ant), Synoeca septentrionails (warrior wasp), Pepsis spp. and Hemipepsis spp. (tarantula hawks).[9] In an experimental setting, only two lizard species (one whiptail and one side-blotched lizard) attacked a velvet ant it was exposed to.[10] In both cases immediately sting the lizards. This sting resulted in the dropping of the ants in both cases and avoidance for the remainder of the trial.[10] The side-blotched lizard is a natural predator of velvet ants, while the whiptail is not.[11] To test the aposematic coloration on birds, mealworms were consumed immediately.[12] However, the painted mealworms were attacked by the birds, but the birds immediately ceased the attack.[12] These experiments provided evidence that the aposematic coloration of velvet ants causes their predators to hesitate, acting as a visual defense mechanism.

The aposematic coloration of velvet ants often corresponds to a specific Müllerian mimicry ring consisting of dozens of species.[10] This offers protection because many predators have learned to avoid prey with this same coloration. American Mutillidae have eight extensive and distinct mimicry rings making up one of the largest Müllerian mimicry complexes on the planet.[10]

The stridulatory organ that velvet ants possess produces an audible squeaking when the abdomen is contracted.[13] This mechanism is an auditory cue warning predators that are about to attack to stay away. In shrews, every time they would get within 1 meter of a velvet ant would being stridulating.[10] Stridulations became more frequent as the predator moved closer to the velvet ant, and the shrew never attempted to attack the velvet ant. However, different scenarios with shrews have shown that the velvet ant would also stridulate after the shrew attacked it. Every time this occurred the shrew dropped the wasp.[13]

A female of Nemka viduata viduata (Pallas, 1773) looks for a nest of Bembix oculata to deposit her eggs.

Male mutillids fly in search of females; after mating, the female enters a host insect nest, typically a ground-nesting bee or wasp burrow, and deposits one egg near each larva or pupa. Only a few species are known to parasitize other types of hosts[14]; exceptions include the European velvet ant, Mutilla europaea, one of the only species that attacks social bees (e.g. Bombus), and the genus Pappognatha, whose hosts are tree-dwelling orchid bees. The mutillid larvae then develop as idiobiont ectoparasitoids, eventually killing their immobile larval/pupal hosts within a week or two. Velvet ants exhibit haplodiploid sex determination, as do other members of the superfamily Vespoidea.